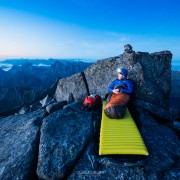 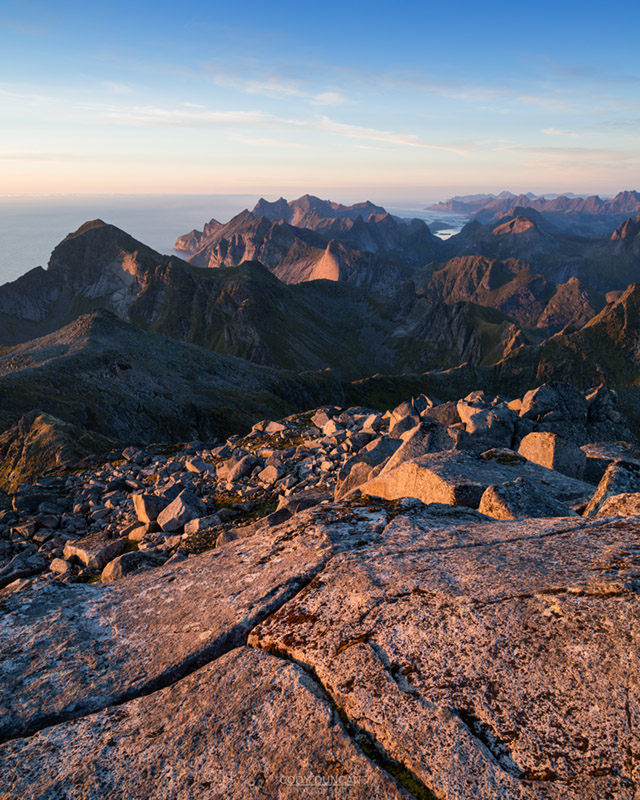 The Hostel at Stamsund, Justad Rorbu og Vanderhjem, the formal name, but everyone just calls it Stamsund, is a magical place and one of the reasons I fell so much in love with Lofoten during my first stay there in the summer of 2001.  The hostel is simple and charming, set in an older fishermen’s building now around a hundred years old, with the tide lapping against the rocks underneath the kitchen – dining room floor.  Over the years it has become a home away from home for me, and hundreds of others who return year after year.

My arrival on this stormy morning was completely unannounced, with few people even knowing I was on the islands.  Yet as I walked in the door of the kitchen to the large group of people sitting around the table I was immediately greeted, ‘Cody, hello!  When did you get here?’

‘Oh hello Cody, I have just made some tea, would you like some?’

‘There’s still some food left on the table, help yourself if you’d like something to eat…’

And so before I could even change out of my smelly clothes or take a shower, I found myself sitting around the table, recounting stories of my last days and hearing about the travels of others whom I might not have seen for a year or two, and trying to put to memory the names of a few new faces whom I’m sure I’ll see around again in the coming years.  Only in Stamsund.

It was now Monday, August 19th.  As afternoon carried on, the rain fell heavier and heavier.  Tuesday it also rained, Wednesday as well as Thursday it continued.  But the forecast for Friday afternoon and the weekend looked promising.  And so I formed plans for the morning, Hermannsdalstinden.

Friday morning I said my goodbyes and caught the bus out of Stamsund to make my way to Reine and again take the ferry.  This time however, I wasn’t going to Bunes or Horseid beaches. I was heading towards Hermannsdalstinden, which, at 1029 meters above the sea, is the highest mountain on Moskenesøy, and the western half of Lofoten as a whole.  It is a rugged and impressive peak that has been on my Lofoten ‘to-do’ list for quite some time, but for some reason has never worked out.  This time I would be in luck. 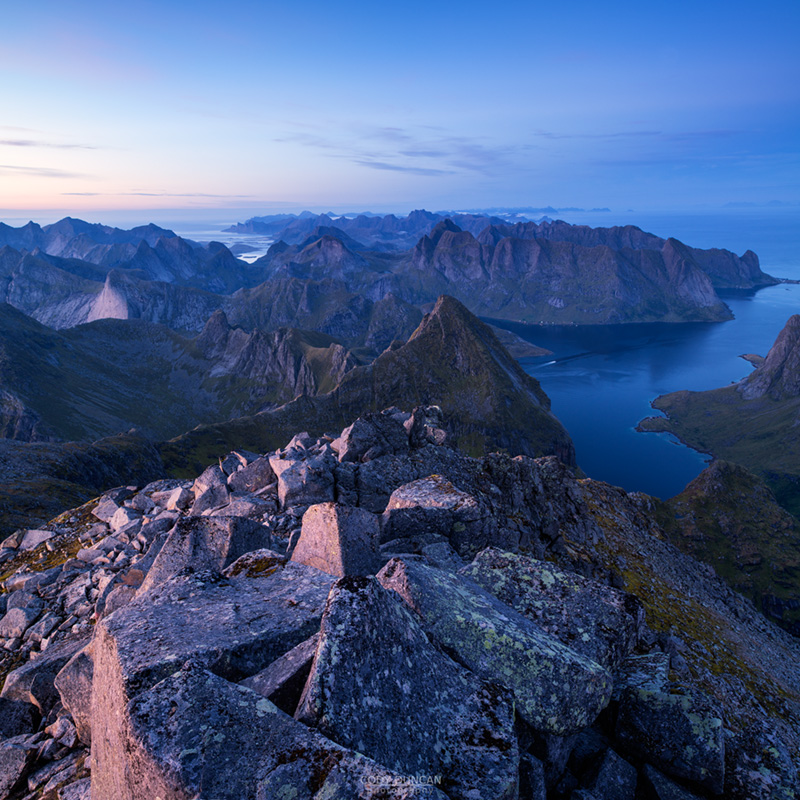 There are two approaches to Hermannsdalstinden.  The main route begins in Sørvågen and heads inland, passing the Munkebu hut, before continuing on towards the mountain.  The second option is to take the ferry from Reine to Forsfjord.  This has the benefit of saving you a few kilometers of hiking, for the cost of 120 NOK ferry ride(!). The savings in horizontal distance earns you a steep, slippery ascent until the two trails meet.  Once you leave the boat in Forsfjord, there is no going back.

As the afternoon ferry departed Reine the sky was still partially filled with low, peak concealing clouds of mist rising in the strong sunlight.  The water of the Reinefjord was like glass, and the boat sped across the surface into the perfect reflections of the surrounding mountains.  After a couple stops to drop off some mail and pickup passengers returning from the beaches the boat entered the deep shadows of Forsfjord and it was now my turn to leave.  Despite a rather full boat, I was the only one to exit in Forsfjord.  I was now alone, only 5 kilometers and 1029 meters ahead of me.  It was 3:45 PM.   I watched for a moment as the boat disappeared in the distance and then began my journey.

The benefit of the Forsfjord route is that you save over half of the (horizontal) distance to the mountain.  The tradeoff is that you convert distance into a steep, slipper slope, at times having to pull on the bracken and trees to keep from slipping backwards as your feet struggle to take purchase on the muddy slopes.  It is somewhat of a relief that after reaching the half way point of the first climb the trail begins to follow a series of rock bands and steps, making for sometimes more exposed, but altogether easier travel.  After 200 meters of ascent the shores of the first lake are reached.  Only 800+ meters to go!

I was initially unsure of where I would camp for the night as I knew the summit to be rocky and not overly conductive to camping.  I had received a bit of beta from some others that there was something of a grassy ledge below the summit that would work for a tent.  Knowing it was unlikely to rain I wasn’t overly worried about shelter. At worst, I would find as flat of a rock as possible to lean against during the short night of late August.  If the weather did turn bad, I could just sit around in my rain gear, or begin hiking back down the mountain.

A little after 7:30 PM I scrambled around the last few boulders and found myself just below the summit.  The sun was getting low on the horizon so I tossed my backpack against some rocks and got to work taking photos.

I never saw anything looking like a good spot for a tent, but I did find several good options to bivy for the night.  I finally decided on a nice flat rock that, although quite close to the edge, was protected by a few rocks that would most likely keep me from rolling off and falling 30-40 meters.   I settled myself in for the night as the last bit of twilight was fading from the sky and the full moon rising higher above the Vestfjord.  At some point in the night the winds picked up in strength and brought a bit of a chill.  I cinched up my bag so that only my nose was visible.  The moon was bright overhead. 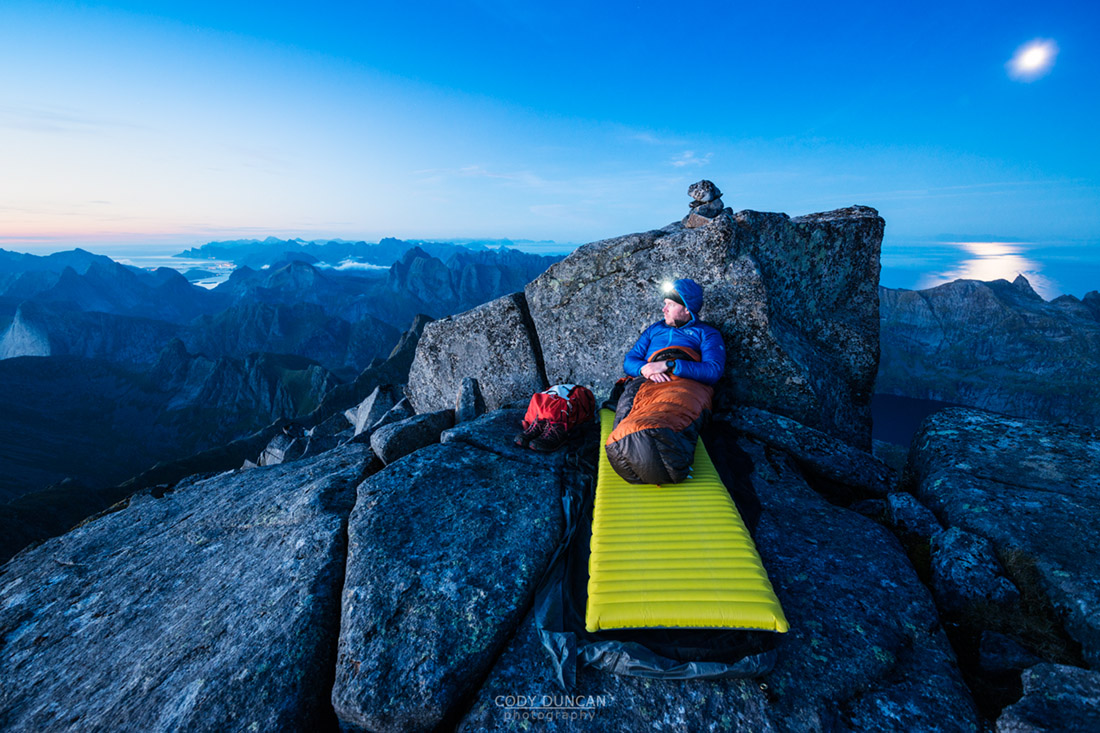 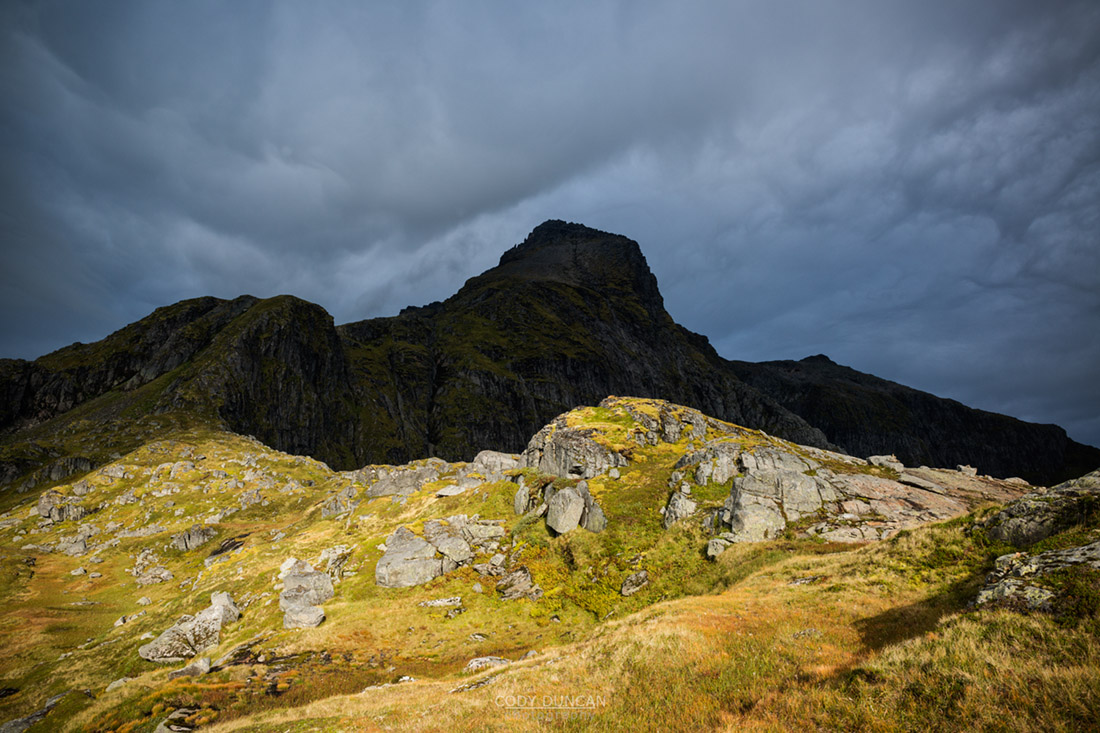 I was up before 05:00, waiting for what the day would bring.  An uneventful sunrise as it turned out.  But I was thankful for the warmth as the first rays of light pierced the cold morning air.  The steam of my tea drifted into the breeze as I held it tightly to heat my hands.  And so there I sat, alone, watching sunrise on the top of Lofoten and wondering what another day in the north would be bringing me.  It was one of those moments that’s probably nicer to share with others, but if you cannot, it’s still better to be there than not.

After an hour of so I noticed some eerie looking clouds beginning to form over the mountains to the west, and combined the the ever increasing wind, I figured I should probably start heading down.  For the second time on this trip, I found myself descending a mountain in the early morning.  Seems a bit odd, with the full day ahead, but so it goes…

Half way down I sat and watched clouds swirling over the peak which was now full concealed with any remaining blue sky being consumed by a wall of gray from the west.  By 10:00 the sky was completely filled dark and forlorn looking clouds.  I passed some others making their way up the mountain and wished them luck, I would not have liked to be heading in their direction.  The difference 15 hours can make.

Soon enough I found myself arriving at Munkebu hut.  Somewhat tired and with nowhere in particular to go I set up camp.  I gave though to heading up Munkan, and had the weather been better, I would of.  But the summit was in the clouds so I laid in my tent and slept the afternoon away.  Lazy life, that of a mountain photographer.

The following morning brought an uneventful hike down to Sørvågen and then what I can only describe as pathetic attempts to hitchhike back to Stamsund.  I managed get a little past Hamnøy, before going nowhere for an hour + of standing on the side of the road until the only bus of the day came and took me to Leknes.  It was a Sunday after all, not good for hitching I guess..  With no busses to Stamsund, I ended up walking about halfway and catching a couple rides.  My feet were now thoroughly sore by this point.  Reaching the hostel, I setup a mattress in the sun outside and once again took a nap.  Exhausted.

Monday brought rain once more.  As did Tuesday.  Blustery weather came on Wednesday before then things began to calm a bit on Thursday.  And finally, in what seemed to be a developing pattern on this trip, the weekend’s forecast was once again good looking.  A plan was made – Camp and Kvalvika beach and hike up Ryten for sunset.  This would be my third time doing this combination of beach and mountain, and it what is now one of my favorite overnight tours on Lofoten. 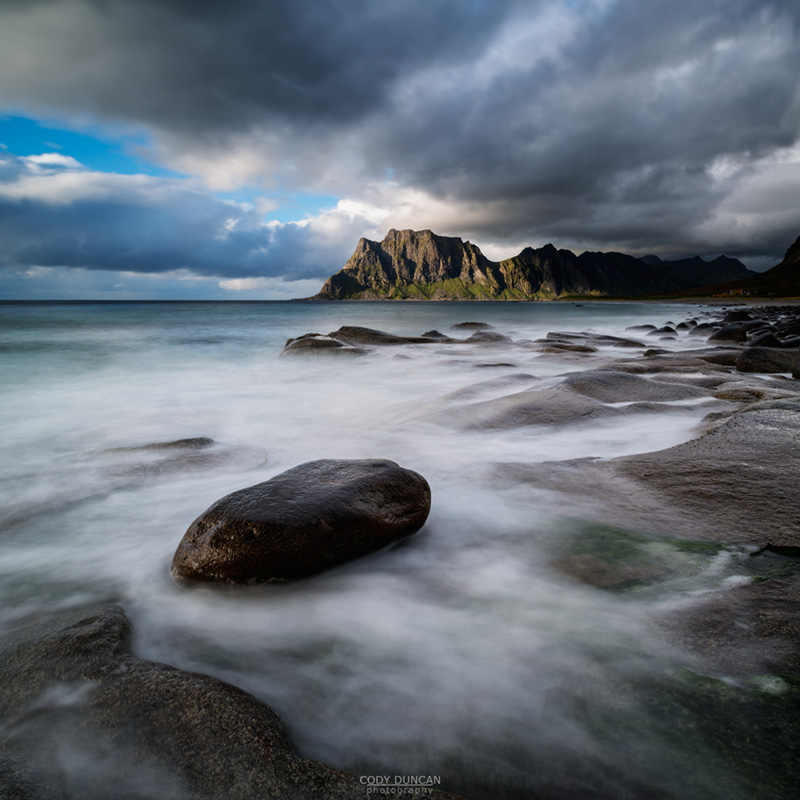