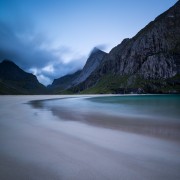 As I reached the summit of the pass between Kjerkfjord and Horseid beach, proper rain turned into heavy rain.  I was also hiking fast and getting hot.  I should have changed into a synthetic shirt, but believing that the rain would only last a few more hours I foolishly stayed in a cotton shirt, which proceeded to get wetter and wetter from my sweating under the burden of my heavy backpack.  By the time I reached the beach, heavy rain had turned into torrential rain, with drops so big they hurt.  I was becoming increasingly soaked by the combination of sweat, rain, and sideways blowing wind.

Reaching the small grassy bluff at the far end of the beach, it was a mad dash to set up my tent beneath the falling sky.  I am quick with tents.  But by the time I through my backpack inside, jumped in and closed the rain fly, everything was wet and I was completely soaked through and through.  Pools of water formed under my dripping wet rain gear as I placed it in a corner of my tent in a haphazard attempt to keep the rest of the tent from getting wet.  My only hope at this point was to strip down to my underwear, crawl into my sleeping bag and hope my body heat would dry me off while I waited for the rain to end.

Hour after hour passed and the rain still fell.  Evening came, then night and the rain continued, unbroken.  I didn’t bother with cooking dinner.  Finally sometime around 03:00 the clouds broke and the winds came.  In the predawn light, I used my tripod, along the the guy-lines from my tent to setup a poor-mans clothes line by which I would attempt to dry my clothes.  The winds blew stronger and stronger, with my tent flattening out once again.  By 06:00 I was fully packed, dressed in semi-moist clothing, with the wettest stuff tied to the back of my backpack.  Despite the early hour, I was ready to get out of there as it looked like a full on storm was about to arrive.  Sand stung me as I crossed the beach and progress was slow as I walked into the winds. 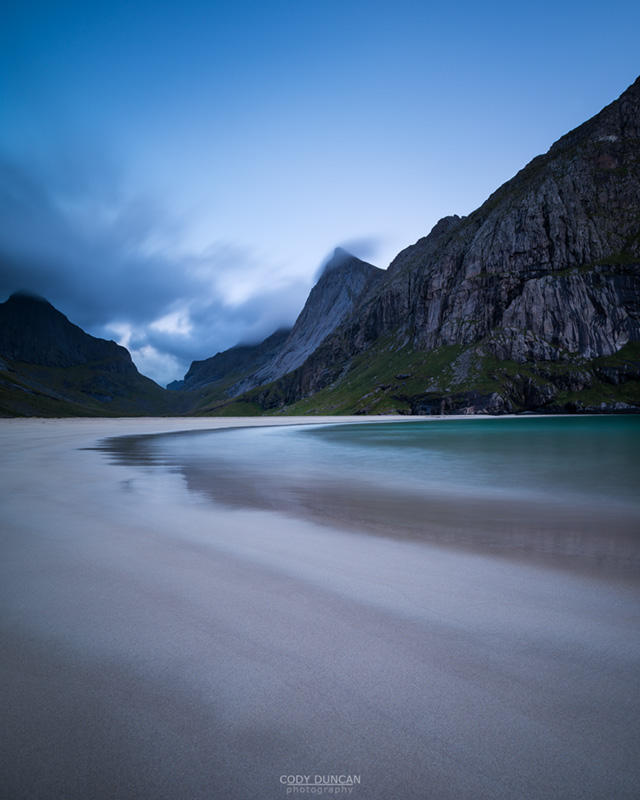 Instead of returning back to Kjerkfjord and the ferry to Reine, and shelter, I took the steep muddy trail that would lead me beneath the steep spire of Kråkhammatind before descending into the lush valley of Fagerådal and eventually finishing at the DNT mountain hut at Selfjord.  On the map, the trail looks relatively straight forward, but in reality, it is often steep, muddy and rocky, with very few moments where one can simply walk.

While I heated myself up to a sweat on the steep ascent, once gaining the pass I exposed to the full front of near gale force winds, and quickly took a break to put on all my jackets.  I would have liked to camp up here, but there was no way my tent would survive in such conditions, so I continued on. 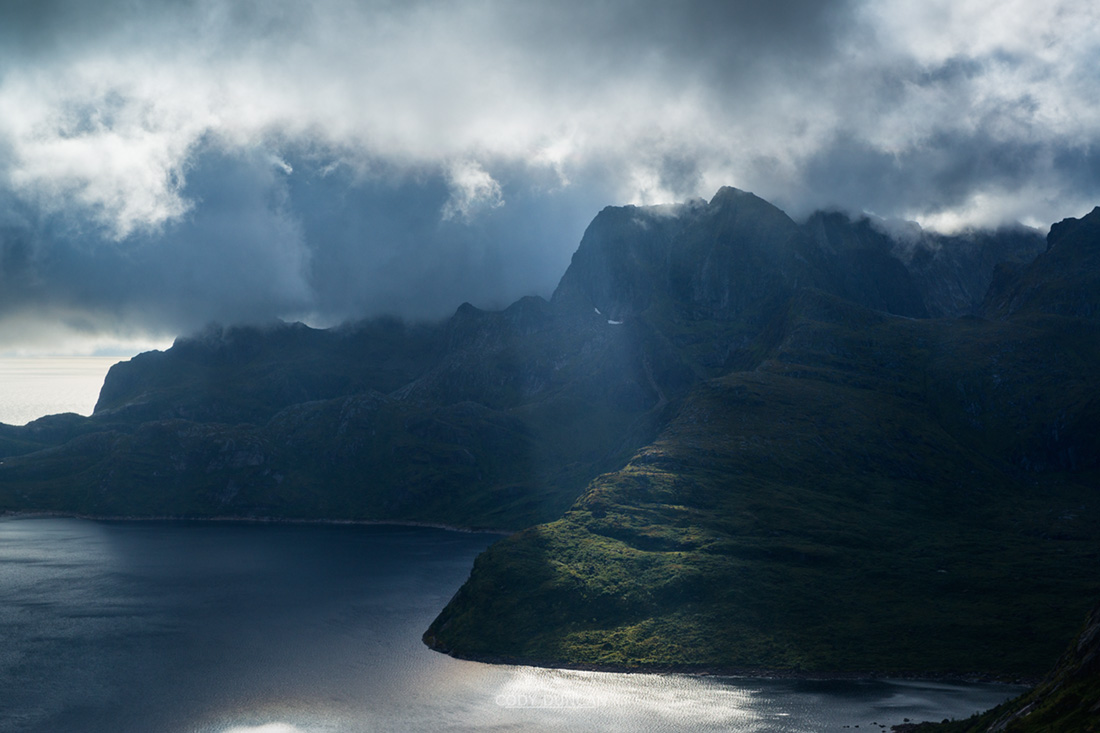 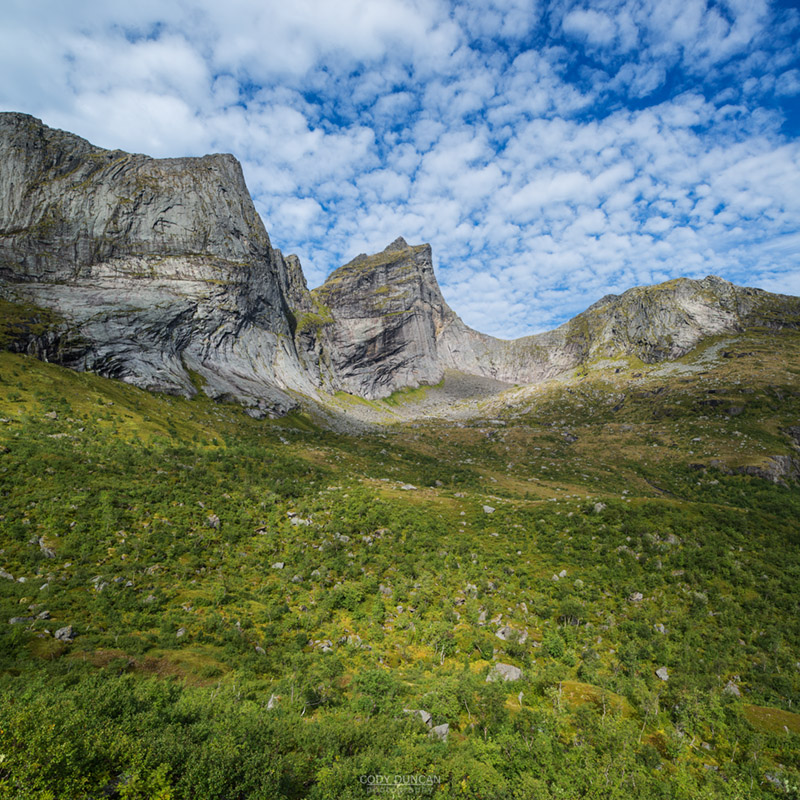 The descent to shores of lake Fageråvatnet was particularly treacherous under the weight of my heavy backpack, with steep sections of loose moss covering otherwise bare, wet rock at 45 degree angles or more.  Loss of footing would have lead to a bad fall or twisted ankles.  Once reaching the lower ground, the trail twisted through trees, over rocks, under rocks, until finally reaching the inner waters of the fjord where it turned into Lofoten super bog.  To this point I had kept my feet more or less dry.  On the last 1 km of trail, this was a hopeless effort and I gave up trying to hop between the ever shrinking, and sinking, dry clumps of grass.  Luckily by now the sun had come out and it was actually beginning to look like a nice day.

The standard Norwegian DNT hut key works for opening the door at the Selfjordhytte, a group of two cabins an a couple out buildings at the end of the fjord.  Upon my arrival I was greeted by a nice French woman who informed me of the news that the water pumps were not working.  The nearest source of water?  Back across the 1 km of bog to a small stream.  I knew I should have filled up my water bottles as I passed!  So before settling down for the afternoon, it was time for more wet feet.

Another text message weather forecast told me that a big storm would be arriving in the morning.  But now into early afternoon the day was actually hot and the winds seemingly gone.  Though a German couple arriving later that afternoon also from Horseid beach informed me that it remained quite stormy and cloudy there.  Such is the changeability of Lofoten. I was in bed before dark, a real bed this time, alarm set for 05:00.

Rain fell in waves throughout the night, but seemed to have backed off as I walked out the door of the hut at 06:00, the sky dark an ominous looking.  I had 12 km walking along the road ahead of me, with no chance of shelter and little chance of catching a ride as there are only a few scattered houses along the way.  Once I left, there would be no return and I would be at the mercy of whatever the sky decided to throw at me.  Despite the chill in the air, the wind, and the off and on sprinkles of rain, I hiked in a t-shirt, so fast I was trying to walk.  In just over an hour I passed the trailhead to Kvalvika beach and knew I was just over half way to the E10 and a good place to hitch a ride.  Or if that failed, the bus would come by at 10:00.

Reaching the outskirts of Fredvang, the rain grew heavier than I would have liked and I was back in my waterproofs for the remainder of the walk.  In a little over 2 hours I reached the E10.  Not bad for 12 km or road on an empty stomach!  A few cars passed, but I must have been a bit rough looking, and none stopped for what seemed like an eternity.  Until finally, a young German family pulled over and could take me all the way into Leknes.  With a light rain still falling, I walked a few blocks to the main road to Stamsund and as luck would have it, a car driven by a Polish electrician quickly pulled over and took me to the corner of the hostel.

I put on backpack for one last time and walked down the familiar road towards the yellow buildings on the edge of the sea.