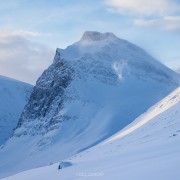 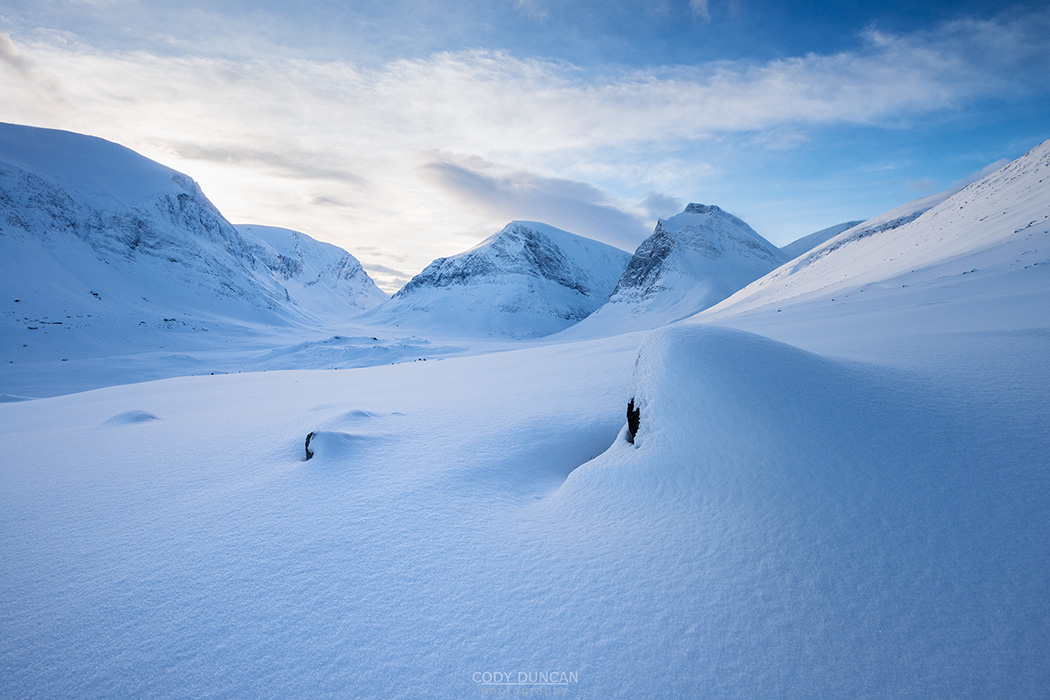 A steady snow was falling by the time the bus pulled into Kiruna late in the morning, the steep slag piles of the iron mine covered in hoarfrost and clouded in mist, resembling the White Wall out of Game of Thrones.  I made my way from the bus station to the hostel, only getting slightly lost and was informed check-in was not for a few hours, at least I could drop off my heavy bags.  I had a bit of scouting to do, namely to make sure if the sport shop had some Nordic touring skis available, as my girlfriend has actually never owned a pair of skis, much less touring ones.  After her arrival, and a hefty bill at the sports shop later, we were full prepared to head into the mountains.

I somewhat optimistically chose the Kungsleden trail as my first attempt for ski touring because, as I sold the idea to my girlfriend, ‘It’s mostly flat, without any big hills to ski up or down.’

More so, both of us had hiked the Route from Nikkaluokta to Abisko in September 2012, and I had hiked it previously in September 2009.  So, other than being mostly flat, it was also a route that I am familiar and comfortable with.  The only real challenge I perceived was weather and distance.  I optimistically put our chance of finishing at 50%.

The night at the hostel in Kiruna passed quickly and we were soon boarding the first bus of the 2014 winter season, heading to the trailhead at Nikkaluokta.  Arriving in Nikkaluokta a few hours later, the bus driver didn’t seem too concerned with collecting payment.  I asked in my bad Swedish if we needed to pay, but was informed that he had forgotten the change purse, the trip was free.  There were a couple other girls getting of the bus who were also traveling to Kebnekaise Fjällstation, the first STF run mountain hut along the trail, however, they didn’t look much prepared to ski the 19 km to get there.  After a bit of conversation, we learned that there is transport by snowmobile for the price of 300 SEK.  With only a few hours until darkness, doubtful enough time to get there, and having gotten the bus trip for free, we decided to spoil ourselves and be lazy.  The real journey could start tomorrow, and I knew this to be one of the more boring parts of the trail, just a long journey through the forest. 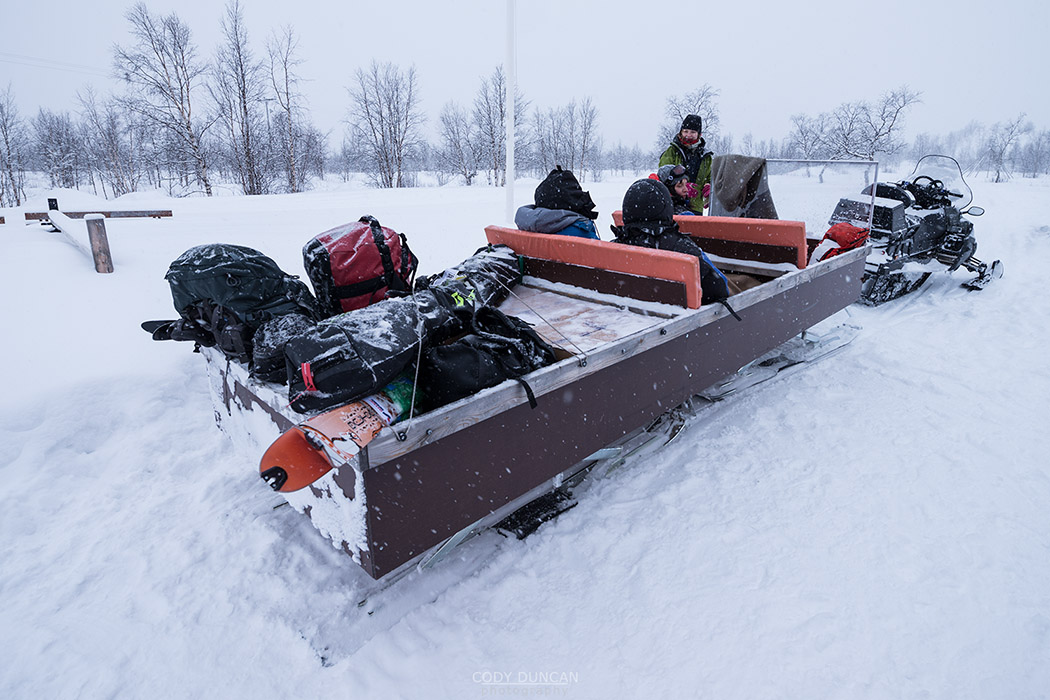 We geared up in thick winter overalls for the trip and were given a blanket to cover ourselves as we hopped onto a trailer pulled by the snowmobile. Then we were off, speeding down a path through the snow covered forest.  There apparently where a few thin spots in the ice, noted by sticks marking where not to go, as we crossed blank lakes and snaked up rivers.  About 45 minutes later we were pulling up to the Kebnekaise Fjällstation.  Snow was gently falling.

If I were 20 years old again, and Swedish, I think driving a snowmobile at one of the Swedish mountain huts would be the job for me!

We checked in as the first guests of the season and had the whole upper dorm to ourselves (no snoring). Kebnekaise Fjällstation is a full service mountain hut, but budgets forced us to decline the dinner and utilise what we were carrying.  Though most of the food is a bit fancy for my simple tastes anyhow, and I’m not sure I’d eat half of it if it were free, much less several hundred Swedish Kroner.  But a beer, warm fire, and, as we thought, one last wifi connection for the week, were thoroughly appreciated.  Snow was still falling as I headed up the stairs for bed.

The forecast had called for a couple days of calm before something of a storm would arrive.  As the world lightened with the arrival of day, I could still see a light snow still falling, nothing to worry about though.  But exiting the main lodge to head to the kitchen for breakfast, it was obvious the snow was deep.  Not ideal for for our first attempts at ski touring. And being the first ones of the season, this left me with the task of breaking 14km of trail through the knee/thigh deep powder.  Still, I remained optimistic as we set off.

Progress for me was slow, but steady, having proper ‘fat’ mountain touring skis and skins to keep me from sinking too much and make cutting turns, under the load of a backpack, on the downhills a bit easier.  For my girlfriend, with less than 1km ever skied on her skinny Nordic skis, the pace was tediously slow, even following in my tracks (which was more like slightly compressed snow than a proper touring track).  The downhills were even slower than the uphill sections for her, and touring was near impossible.  After more than an hour of travel, and barely more than 1km from the hut, it was decided to turn back.

Just at this time, a snowmobile passed by, cutting a nice trail.  But it turned to another part of the mountains and didn’t continue in the direction we needed.  We returned to the hut, disappointed.

We sat for a while, trying to decide what to do.  Having already bought 2000 SEK in hut vouchers (the mountain huts don’t accept credit cards anymore), I figured it would be best just to stay at Kebnekaise Fjällstation for a few more nights and at least get a little enjoyment out of the mountains before continuing on to Lofoten Islands again.

With the brilliant snow conditions, I wasted no time in skinning up a few hills and getting some turns in on the way back down.  If I wasn’t going to complete the tour, I still planned on enjoying myself.  This lasted for two days.  A storm arrived.

I’ve probably mentioned a dozen times in my last few posts that this was an unusually dry and warm winter for much of Scandinavia.  The storm arrived from the south.  Kebnekaise Fjällstation is somewhat sheltered from this direction, but I heard reports of broken windows and severe conditions in the other huts as they are situated in a series of north/south running valleys.  But with the wind came warm air and positive temperatures; in February!  There went my nice powder.

Tuesday morning it was time to leave the mountains.  We booked a return journey on the snowmobile back to Nikkaluokta and then planned on catching the bus back to Kiruna and continue by train to Narvik for the night.  Back in Nikkaluokta we had a couple hours to wait for the bus, but somewhere in the back of my mind, something was nagging me.  This led me to a little double checking of the schedule, where upon I was able to decipher that there is actually no bus on Tuesday.  This was confirmed by the shopkeeper.  Shit!  I could only sit there and laugh at my stupidity, as I contemplated having to return back to Kebnekaise Fjällstation again.

Luck was on our side though, as there randomly happen to be a Dutch couple and tour guide sitting in the cafe.  I wandered over to their table and explained the situation, and if we could maybe get a ride back to Kiruna.  I try to avoid putting people in such situations, where they might not want to say yes, but will look selfish if they say no and then have to finish their coffee with you staring at them.  But happily for us, they were quite nice and quickly offered to let us come along.  Skis were loaded into the van and off we went back towards civilisation.

We had a few hours to kill in Kiruna, so spent most of waiting in the warmth of the Folkets Hus – a much nicer place to wait than the bus station.  I actually thought there would be a bus to Narvik, but apparently it didn’t run on Tuesdays either, so we caught the free transfer shuttle to the new train station.  And there the wait began.

As much as I admire and will compliment the Scandinavians on nearly every aspect modern life, trains, at least in the north, are not their strong point.  Hour after hour passed, as the LED timetable board scheduled a new arrival time every 30 minutes or so.  Perhaps I should have picked up something for dinner in Kiruna?  Eventually, about 3 hours late, the train arrived and carried us west, back towards the Norway where I left little more than a week previously.  After the mandatory night in Narvik, although we arrived quite late, so I don’t begrudge the lack of onward transport options, we were on the morning bus back to the Lofoten Islands.  I wondered what new adventures would await.  (Mostly bad weather as it turned out…) 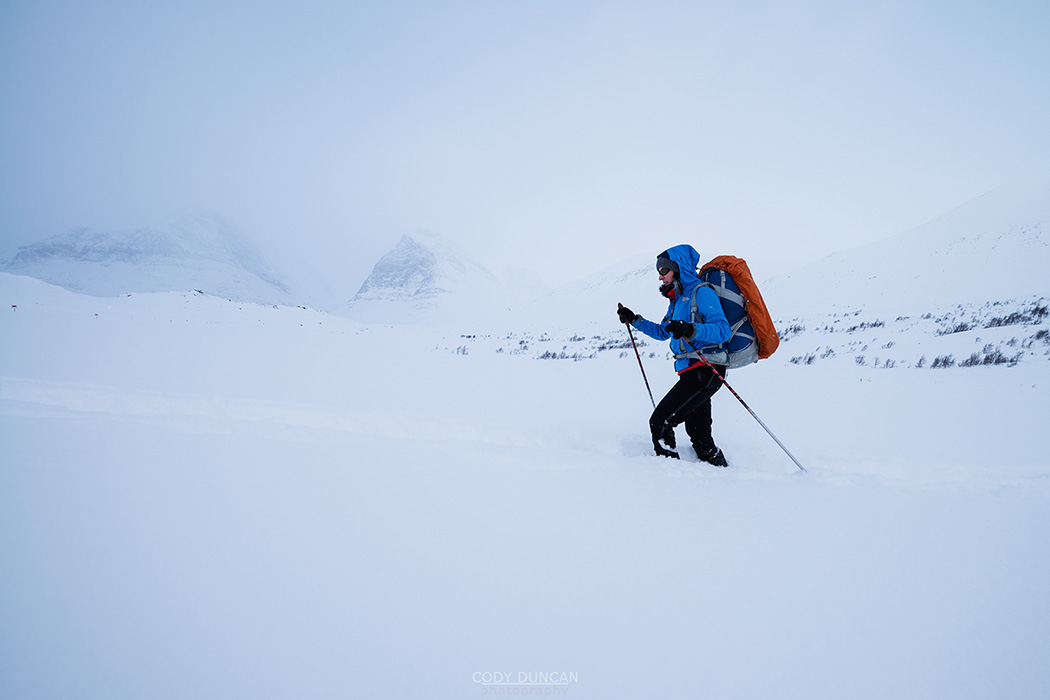 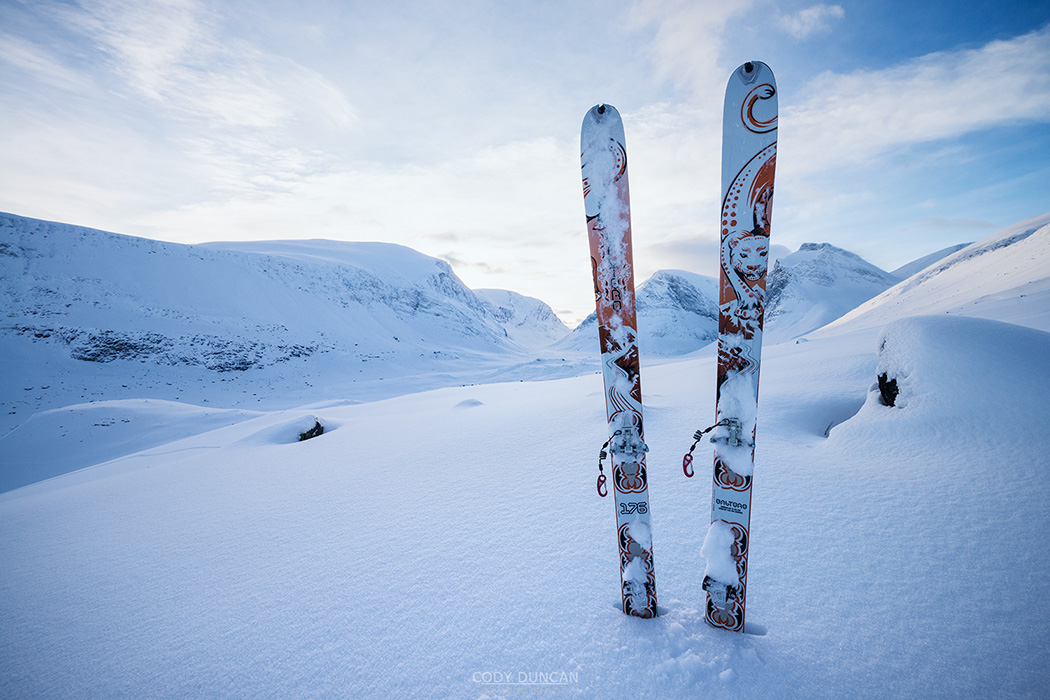 Photo: My ski getting ready for a run on some trackless powder, Kebnekaise Fjällstation, Sweden.  February 2014 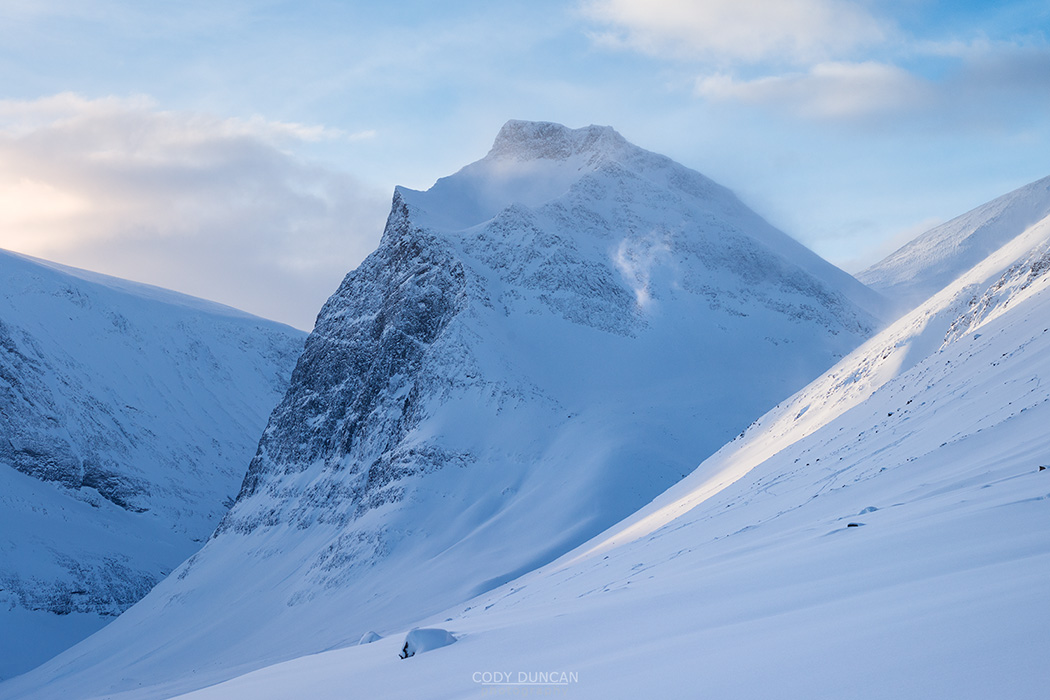