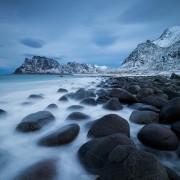 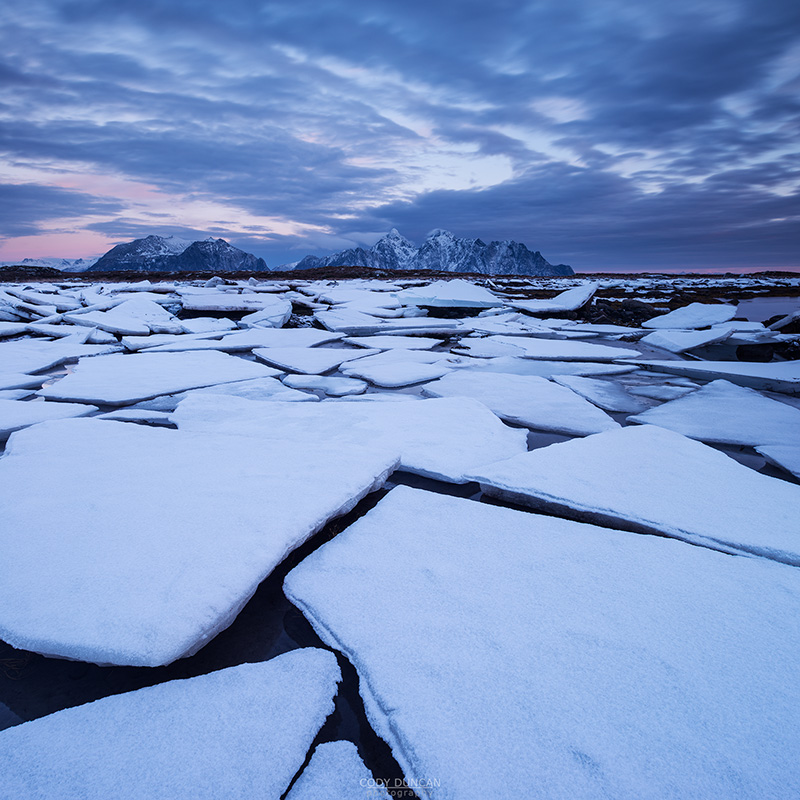 After the previous night’s sunset at Å, I was hoping for one last view of Reine in the morning, but alas, I rose to a heavy mist falling from the sky.  It was now Friday, February 7th, I had been on the island for a week.  A bit ahead of schedule, perhaps because I could feel the pull of a warm shower, I began my journey back to Stamsund to meet with the Australians.  We didn’t have any firm plans of meeting, just ‘sometime after lunch,’ as abstract of a term as that can be.  But with the day starting as it was, I figured they wouldn’t be getting out of the car much either.

No one was around when I arrived, and I’m not even sure if Roar was expecting me or not, but I called and announced my arrival and was given directions to our accommodations for the next days.  Opening the door to the cabin, I was greeted by a rush of warm air, something I hadn’t felt for days – I’m not sure my fleece or long underwear came off at all during the previous week.  A bit gross, I know, but that’s the way it is; you don’t have to worry about how bad you smell when you’re alone.

Soon however, a car, packed to the brim with three Australians – Rod, Michael, and Andrew – and accompanying luggage and camera gear pulled up outside.  You might remember that I traveled on Lofoten with Rod Thomas last year in the spring.  Now he and a couple friends were back for the winter experience, although the winter thus far was proving to have less snow than last year’s spring.  So it goes on Lofoten.  Michael Fletcher is a film maker and was there for a bit of behind the scenes documenting the trip, while Andrew Cooney, at just 18 years old, is a fellow landscape photographer looking for a bit of adventure in the north.

Not sitting around to waste any time in the short arctic days of winter, and with the weather seeming to improve a bit, the car was unpacked of unnecessary luggage and re-packed with people and cameras to hit the road.

Other than the popular beaches of Utakleiv, Haukland, Unstad, and Eggum, much of the central Lofoten island of Vestvågøy is often ‘drive through’ country for most photographers, as they move between bases at Svolvær in the east and Reine in the west.  I’m not sure why this is, probably because there are fewer roadside attractions than the other islands, especially Moskenesøy, where you barely need to walk more than a few meters from the car for something scenic. Vestvågøy requires more use of your legs to fully explore it’s character, but this doesn’t mean there are not some seldom photographed scenes that do make an appearance from time to time, and it’s actually my favourite island for Autumn.  In winter however, there is the difficulty of the sun.  Or more exactly, where the sun is.

The light of the winter months on Lofoten is very southernly directed, rising a bit to the southeast and setting a bit to the southwest.  And south means the open waters of the Vestfjord and, to put it bluntly, often not as scenic of a coastline as the northern side of the islands.  Of course there is Reine and Olstind, but to attempt to pull out a variety of images for multiple locations can be difficult at times with the sun low on the horizon and many areas receiving no direct sunlight.  This, combined with the often heavy cloud, means there are a limited number of locations where one can attempt, with an interesting composition, to photograph direct light.

We headed east from Stamsund, along the coastal route to Valberg and beyond.  In normal winters, where the islands are covered in snow from sea to summit, almost everything can be scenic here.  This year however, with the lower elevations mostly consisting of the drab, soggy brown grasses and heather of winter, it took a bit more effort to find something interesting.  So with little snow, ice is the next best thing.

I took us to the area around Dal, where there can be some interesting bog and moorland that sometimes freezes nicely.  But upon arrival, the ponds weren’t so interesting, but the ice covered coastal shallows, with some scenic views towards Vågakallen in the distance, were.  The sky didn’t do too much, but I found the ice textures to be fascinating.  Soon we were back at the hostel and I was enjoying my first proper dinner in days. 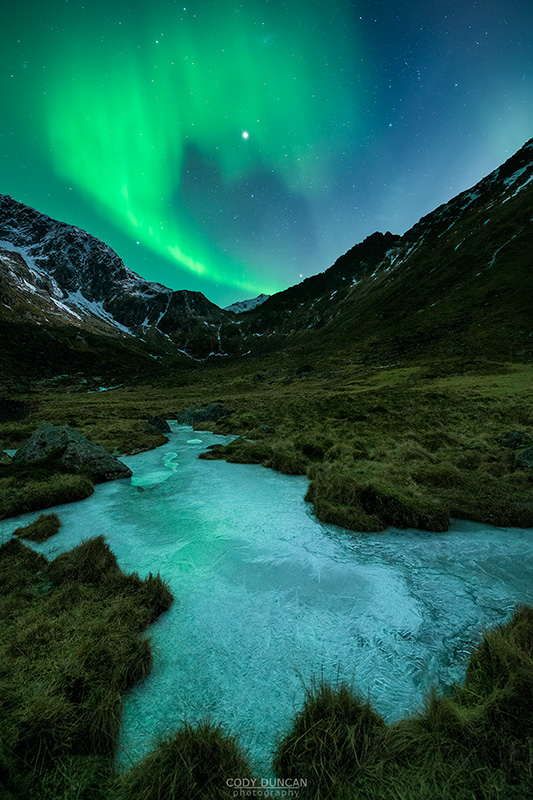 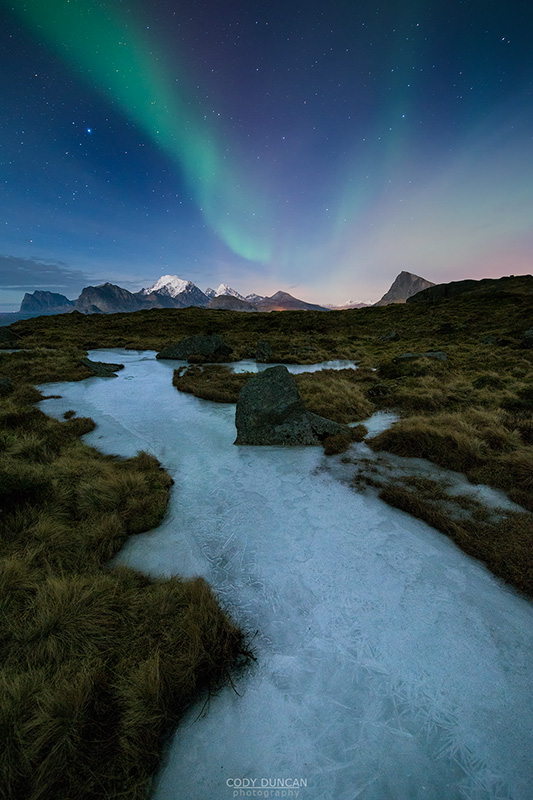 What had been a non-eventful, and cloudy, sunset turned into clear skies as the evening progressed.  We headed out into the darkness and began the wait for Auroras.  A little after 9:00pm, they began to appear, though mostly quite faint.   We first headed to Myrland beach, as it gives a nice overview of the northern sky, with some scenery for the foreground.  But the lights quickly faded after our arrival so we headed back to Storsandnes beach to see if things would be better.

This was the near the location of the ice rivers which I had photographed a few days earlier, and wondered if it would make a good compositions for northern lights, should I get the chance.  So with the Aurora there, but not overly active, I headed up the hill with Andrew to see what I could come up with.  Nothing spectacular as it turns out, mostly because the sky began to cloud over again.  But I saw potential for the future with better conditions.  It was nearly 2:00am when we pulled back into Stamsund.  Luckily I had enough sleep reserves from the previous week already built up!

Saturday was grey and mostly uneventful. 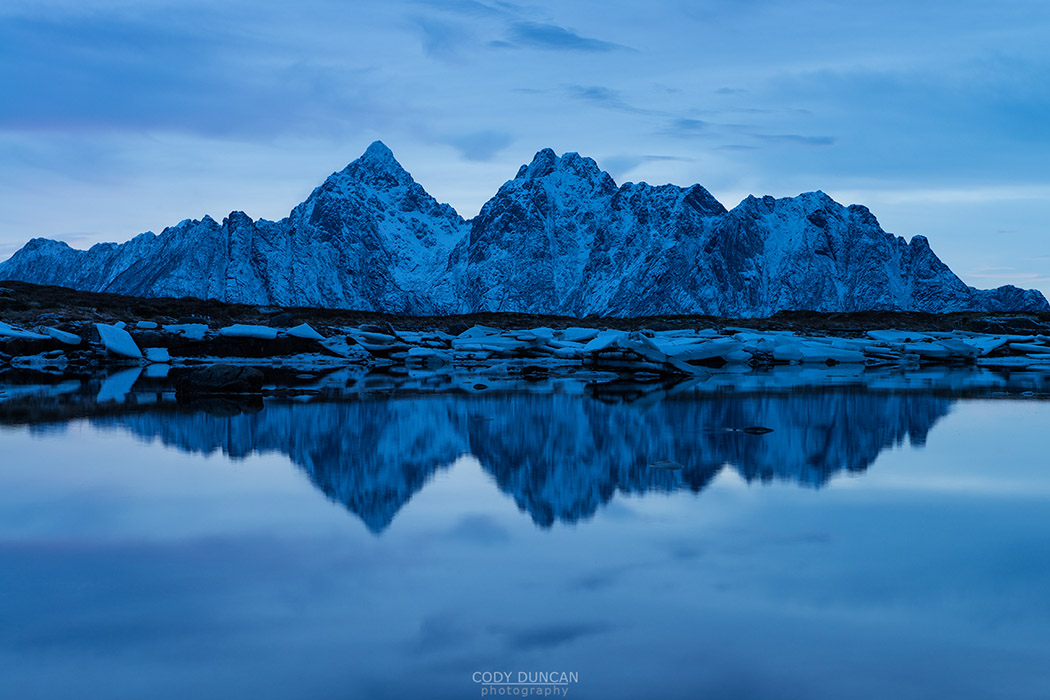 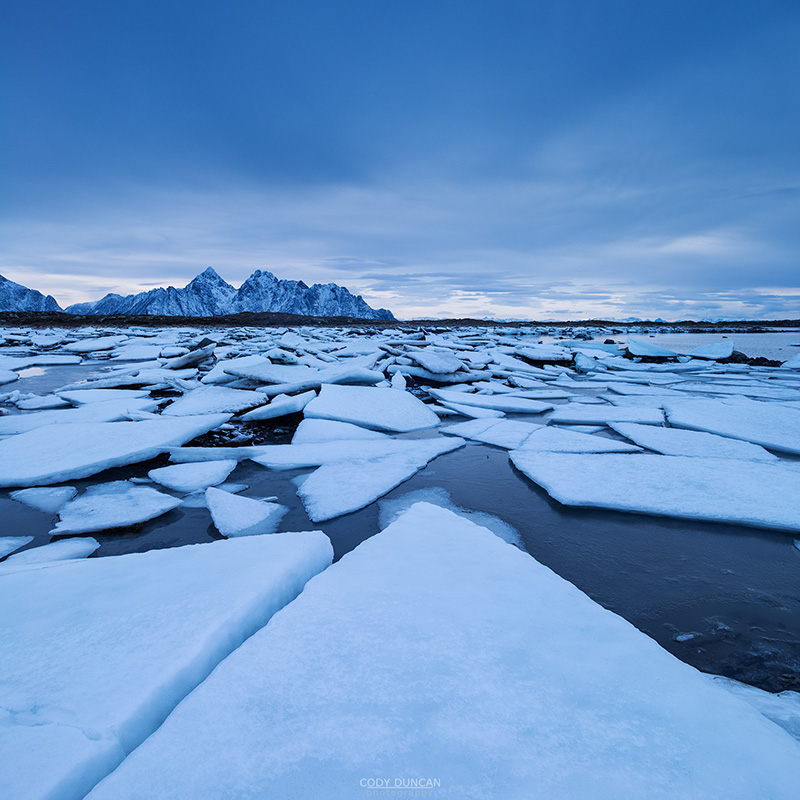 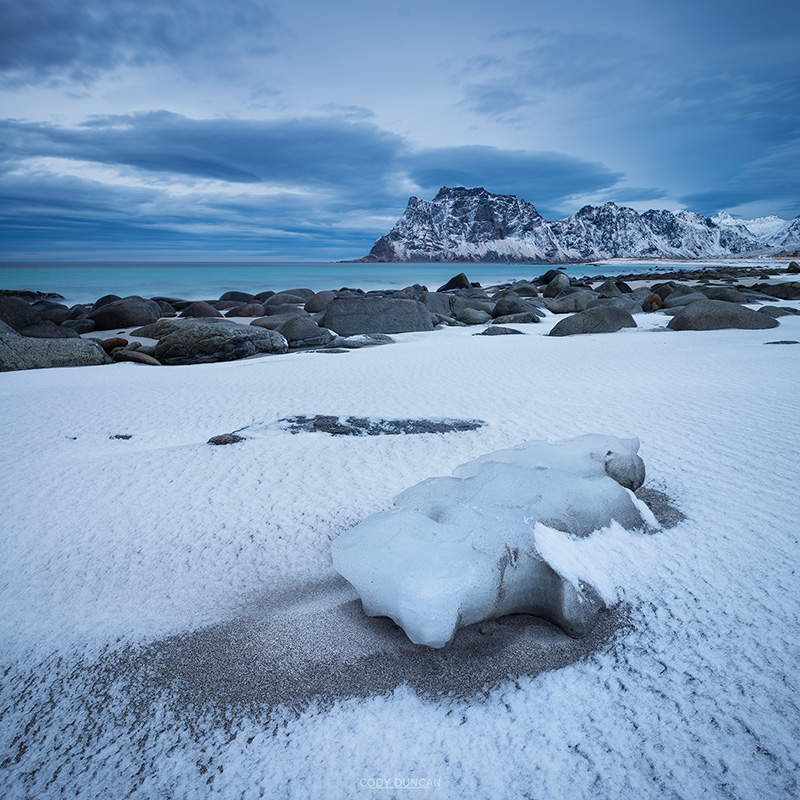 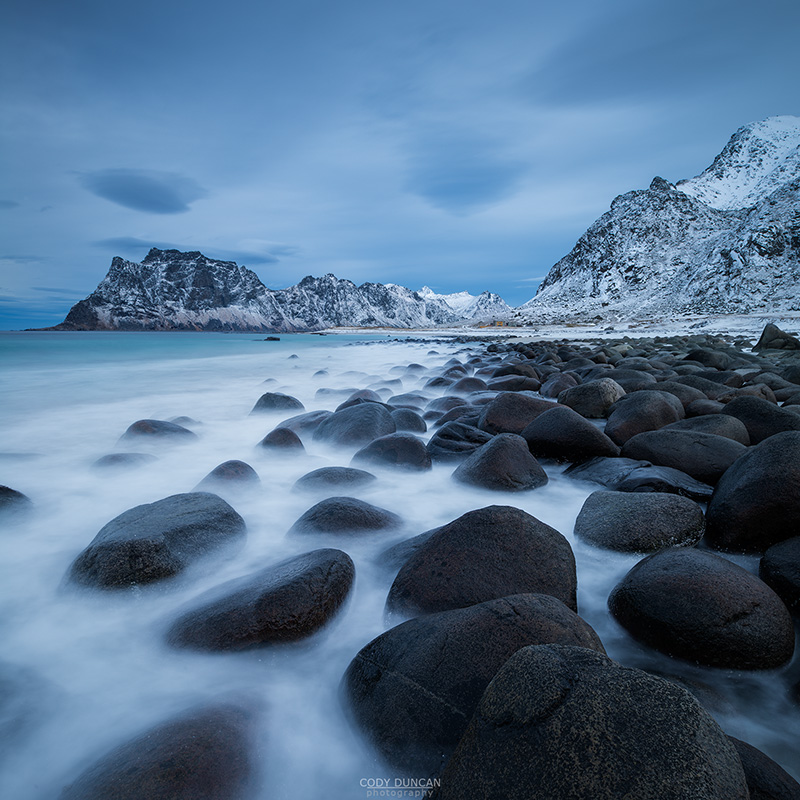 Walking out the door early Sunday morning just as the horizon was beginning to glow, I noticed and unexpected dusting of snow had fallen overnight, cool!  We first headed out to the coast at Dal again to see if any color would appear.  But what looked to have strong potential soon faded to a deep bluegray.  With the rare snow on the ground, I thought it best to get to one of the beaches as soon as possible, before the snow was washed away by the incoming tide or filled with footprints by other photographers or locals on their Sunday walks.

We headed towards Utakleiv, as that would provide up with the most options.  Passing Vik beach, it was full of seaweed and the tide was already receding from the snow line.  Haukland was full of people and dogs.  This left Utakleiv.  Exiting the tunnel, I could see there were no cars in the parking area, and pulling up, the beach, and faint layer of snow, where largely untouched.  Perfect!

It was well into the afternoon that some color began to appear in the western sky.  So we did the obvious thing, headed west.  This turned into one of the best sunsets I’ve ever seen on Lofoten.  Though unfortunately I don’t think I took us to the correct place to fully enjoy it.  We first attempted a location near Fredvang, but the tide was wrong, and it was a bit windy so we headed back to Skagsanden beach, with the sky and mountains fully aglow with bright pink and orange.  I was content with the day, but I felt the other guys were a bit disappointed that I hadn’t taken them to a more spectacular location.  Soon the light was gone and it was back to Stamsund.

The islands were dry, no rain and barely any snow, yet a layer of cloud was still nearly always present.  Monday was spent at Unstad beach before our final night in Stamsund.

Tuesday brought some interesting light at Henningsvær, but this soon turned back to the usual grey.  We didn’t have much time to waste anyways, as it was time to change locations and head to our new accommodation on Hamnøy for the next few nights. 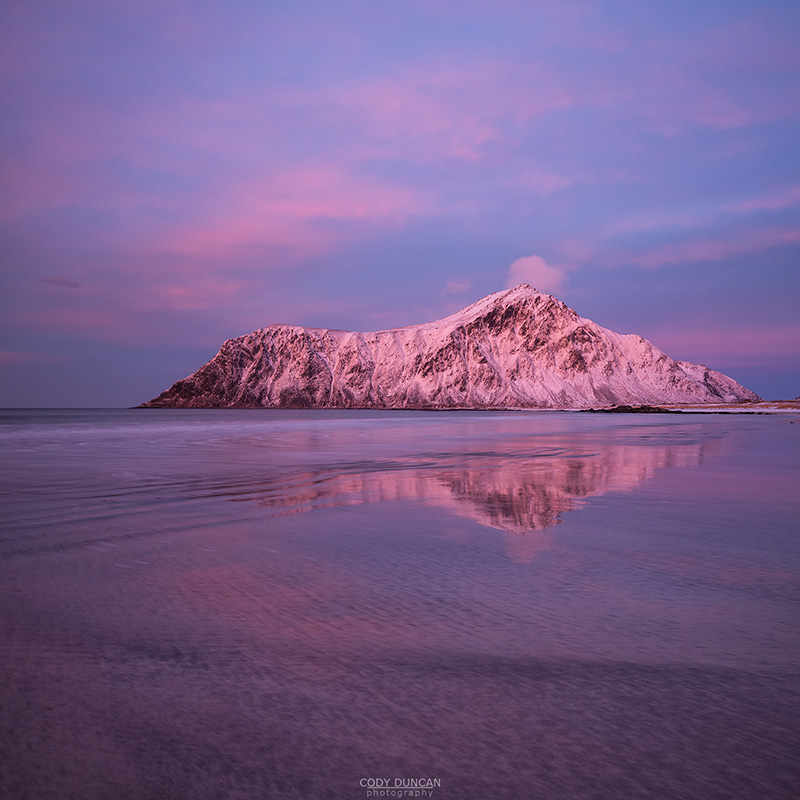 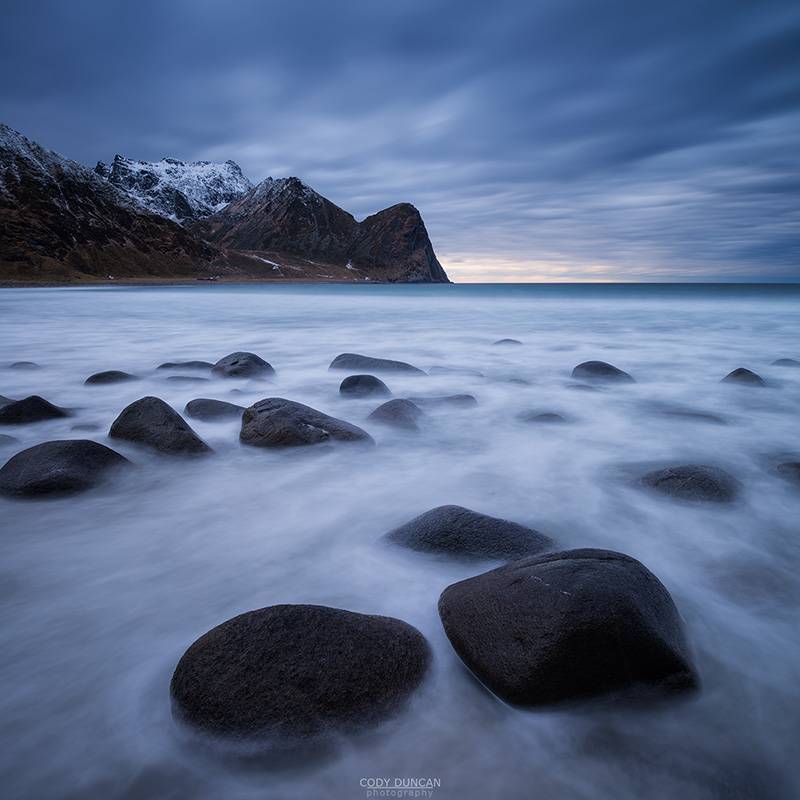 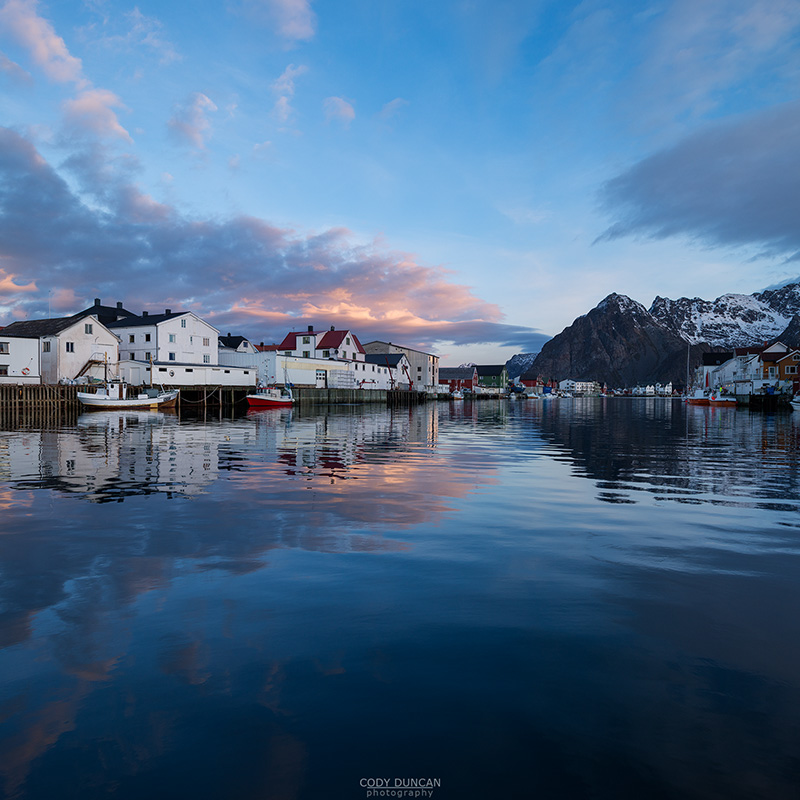